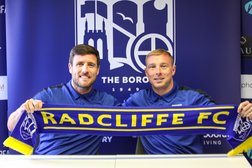 Radcliffe FC are delighted to announce the signing of 35-year-old midfielder, Nicky Adams. Nicky brings with him a wealth of experience to the club, having featured in over 550 EFL games across a 17-year career.

The 35-year-old ventures out into non-league for the first time in his career, having spent time in the Championship, League One and most notably, League Two. Nicky has the 12th most appearances out of anyone in England’s fourth tier, featuring a total 374 times with 5 different clubs.

Nicky needs no introduction to football in Greater Manchester, having featured for Rochdale, Bury and most recently, Oldham Athletic. Despite being from Bolton, he put his name up in lights at rivals Bury, where he made a combined 182 appearances across 3 different spells with the Shakers.

The ex-Wales U21 international joins the club upon the expiry of his contract at Oldham Athletic, having featured 67 times for the Latics and leaves on the back of a disappointing season at Boundary Park, as John Sheridan’s men suffered relegation to the National League for the first time ever in the last campaign.

Similarly to Luke Joyce who joined earlier this week, he too is a former teammate of manager, Bobby Grant. The two paired up at both Rochdale and Oldham Athletic, and will now be reunited at the Neuven Stadium next season. Luke and Nicky are also former teammates, brushing shoulders at Carlisle United between 2016-2018 in League Two.

Speaking on joining the Boro in an interview, Nicky said - “The club is really trying to make it as professional as possible and you can see where they want to take things, that was a big thing for me, I want to be part of something that wants to go forward and really take off, it was an easy decision to come here.”

Radcliffe manager, Bobby Grant, spoke on the calibre of players his latest two additions are, quoting - “They’re two massive signings with bags of experience, quality and leadership. The types of players that we’re looking for and bringing into the building are winners, and for us this season that’s the bar, they’re the type of personal we want, we’re delighted to get them in.”

Welcome to the Neuven Stadium, Nicky!

Buy your 2022/23 Season Ticket here to see Nicky Adams, Bobby Grant and the rest of the squad in action!